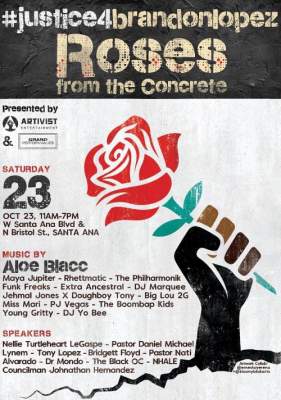 Remember that unpermitted concert that Santa Ana City Councilman Johnathan Ryan Hernandez and his homies hosted, on October 23, 2021, at the intersection of Santa Ana Blvd and Bristol Street? They did this ostensibly to remember Hernandez’ criminal cousin, Brandon Lopez, who was shot by Anaheim police officers, after a police pursuit that ended in Santa Ana.

Now we know why Hernandez and company refused to pull a permit at Santa Ana’s City Hall, for the event in question. Turns out the event cost the city of Santa Ana as much as $100K – mostly for police services including erecting barriers to keep the crowd at the event safe from passing vehicles, according to our city hall pajaritos.

If Hernandez and his pals had pulled a permit for the event guess what? They would have had to pay that six figure bill! Hernandez knew that and that is why they refused to pull the permit.

We are told that Mayor Sarmiento and the rest of his Gang of Four (Hernandez and his Council Colleagues Jessie Lopez and Thai Viet Phan) all circled the wagons around Hernandez and insisted that the City Manager and the SAPD allow the event to happen, without a permit.

Sarmiento in fact has been telling residents that it was okay for Hernandez to host the unpermitted event, because he is a Council Member. What this means is that, apparently, Sarmiento believes that he and his Gang of Four can do whatever they want, and ignore the city ordinances the City Council is ostensibly in charge of enforcing!

There are three major problems with Sarmiento’s rationale. City expenditures that are over $50K must be approved by the City Council! The fact is this event was held without a vote by the City Council to approve the money to provide police and event security – not to mention the cleanup cost for picking up the trash that was left behind by Hernandez and company.

Secondly City Council Members may not accept a gifts from entities doing business with the city. You can argue that the city spending $100K on the Hernandez event was in fact a huge gift to him!

That brings up a third problem for Hernandez. The money the City spent on his event was a gift he is going to have to account for in his next FPPC candidate filing.

We believe that our City Council Members should not ignore city ordinances that are not convenient for them. We cannot allow our politicians to behave as if they are above the law. The fact that our Mayor, Sarmiento, has no regard for our laws is particularly disturbing when you take into account his status as a practicing attorney.

Clearly the actions of Hernandez and Sarmiento should be investigated, by the OCDA, the State Attorney General and the FPPC. But we are betting those agencies will all look the other way.

Imagine what would happen to you if you held a huge unpermitted event that blocked our city streets?

Remember that this event was NOT a protest. It was a planned concert! Of course the organizers should have obtained a city permit!