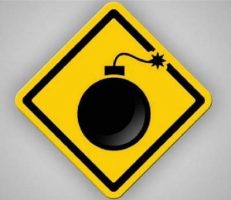 The school was placed on lockdown while the Orange County Sheriff’s Bomb Squad conducted a search for explosives.

At approximately 4:20 PM, the high school campus was rendered safe, and students were released.

No suspect or explosives were located.

« Santa Ana High School locked down due to a report made to the SAPD
Safe zones for O.C. families in child custody cases created and release of sex offenders opposed »