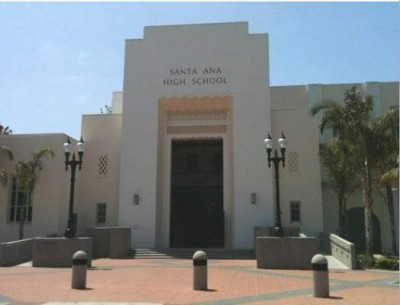 Update at 3:34 pm – Update: Police have confirmed there is no active shooter and no injuries; only a threat at this point. SAPD is now handling the investigation. Info on student dismissal will be forthcoming, as soon as clearance is received from SAPD.

Update at 4:35 pm – After a thorough search of the area, the scene has been cleared and rendered safe. Students and staff have been released.

Update – ABC News is reporting that the lockdown is due to a possible bomb threat and a potentially armed person on campus.

ABC News also reported that their news helicopter shot footage of SAPD “officers who arrived in several patrol and SWAT vehicles. One person, who appeared to be conscious and alert, was wheeled away from the campus on a gurney by first responders and placed in an ambulance. Whether that person was seriously injured was unclear.”

The SAPD has posted this message on Twitter about the unfolding situation this afternoon at Santa Ana High School:

Police Activity in the area of the 500 block of W. Walnut Street. Please stay away from the area. More information to follow.

Out of an abundance of caution, #SAHS has been placed on lockdown due to a report made to police. Students and staff are safe, and all security protocols are being followed. More information to come.

If you have any questions or concerns, please call the SAUSD Communications Office at 714-558-5555.