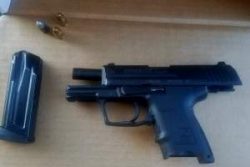 Two male subjects ran from the police and the SAPD detectives observed one of them discard a loaded black HK 9mm semi-auto under a vehicle.

All of the subjects were detained without incident.

« An inmate at the O.C. Intake Release Center died in custody this morning
So. Cal. rehab facility owner gets over 50 years in prison for sexually assaulting women »