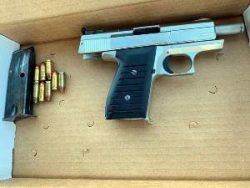 SAPD MET Police Detectives stopped a vehicle the in area of 1600 S. Cedar. this morning, according to their Twitter account.

During the traffic stop, the driver admitted to possessing a firearm. A search of the vehicle revealed a loaded semi-auto handgun.

The driver was a documented gang member and he was subsequently arrested without incident.

The incident happened near the southwest corner of Madison Park.

The SAPD did not identify the suspect.

« This week’s Cochino List includes a Nguyen’s Kitchen and a Wok-In
A man was found shot to death in his vehicle near the Flower St. Park tennis courts »