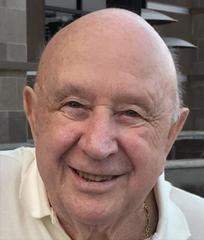 The family of Wayne Richard Pompeo, father of U.S. Secretary of State Michael R. Pompeo, has set up a memorial fund in his honor to benefit the Santa Ana Public Library.

Wayne Richard Pompeo passed away on April 30, 2020, at the age of 89 after living in Santa Ana for almost six decades.

Mr. Pompeo and his late wife, Dorothy, moved to Santa Ana after they were married in 1961. Mr. Pompeo was born and raised in New Mexico, served in the Navy during the Korean War as a radio operator on the U.S.S. Rupertus and then moved to California where he worked for Standard Pressed Steel Co. for almost 50 years as an inside salesman and production control manager.

The couple’s three children grew up visiting the Santa Ana Public Library bookmobile that parked outside Newhope Elementary School. When the children were older, Mr. Pompeo and his wife drove their children almost every Sunday afternoon to the Library’s Main Branch.

Mr. Pompeo continued to be a frequent and enthusiastic patron of the Library for the rest of his life.

In addition to his son Michael R. Pompeo of Arlington, Virginia, he is survived by his daughter Michelle Lindfors of Orange, son Mark Pompeo of Santa Ana and three grandchildren.

The family is asking that in lieu of flowers, donations be made to the Santa Ana Public Library.

Checks should be made payable to Friends of the Santa Ana Public Library. Write Wayne Pompeo Memorial on the memo line.