Now Santa Ana’s haters are riled up about the Santa Ana Wellness District.  One of our readers forwarded us a particularly vitriolic message from a fellow named Tim Rush.  Rush was one of many neighborhood activists who supported the illegal street barricades that were installed in Santa Ana’s French Park – to keep Mexicans out.  The barricades had to be taken down after the ACLU beat the haters in court.

The L.A. Times reported in 2006 that Rush made 300 telephone calls in 24 months to City Hall, complaining about his Latino neighbors. 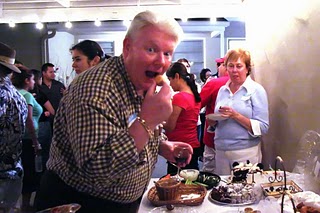 The irony of all this is that Rush himself was busted a few years ago for charges related to real estate fraud.  But I guess he and his supporters are OK with white collar crime?

Now Rush is angry about the Wellness Corridor.  Here is what he had to say about it in the email that was forwarded to us by a reader:

Many of you have heard of this initiative which is being led by Latino Health Access. While it has a title which sounds terrific, and one which anyone would want to embrace, it is far from homespun. I encourage you to do a bit of research on this socialist diatribe, simply Google “Santa Ana Wellness Corridor” and do some reading.

This was launched on the 19th of November of last year and comes before the City Council for a vote this coming Tuesday. The backers want the blessing of the Council so they can continue to ratchet up their campaign of terror to reverse the “Economic Spring” that has come to blossom in our fair city over the past several years.

This Wellness Corridor resolution seeks among other things to control values of real estate, change the name of Fourth Street to what they claim is “the historic roots of the downtown as ‘Calle Cuatro.” Any and all activities for Latino/Hispanic themed events are to be given preferential treatment.

This resolution is abhorrent to our democratic way of life. It is an affront to what this nation stands for, and it is downright racist. Latino Health Access (LHA) would have you believe that their motives are pure and altruistic, but one has to question why they would push such a divisive measure upon the citizenry?

We know that the economy is cyclical and that our downtown like tens of thousands across the country suffered hugely as changes in shopping/demographic fluctuations occurred. This manifested itself with the flight of the Anglo merchants to South Coast Plaza, SA Fashion Square/now MainPlace, and new communities east of us.

As the economic world doesn’t like a vacuum, why the empty storefronts soon became filled with merchants catering to largely Hispanic clientele. This happened between 1966-1980+-.

Well…….the world has changed, and those customers had children who largely don’t want the same shopping experience. That is why our downtown has been suffering so badly over the past fifteen years or so. The only thing missing was a funeral. So new thinking, new merchandising has brought us this wonderful wave of new restaurants, the Artists Village, Grand Central Arts, new retail etc.

Unfortunately there are those who believe they have been targeted to move. Which is untrue. Simply property owners after suffering tremendous losses for years have seen an opportunity to market their space to cutting edge retail and restaurateurs who want to try something new have been embraced.

The much bandied word “gentrification” has been used to ratchet up the Fahrenheit on the dialogue. What is puzzling about all of this is that the facts seem not to matter. I am told that something like two thirds of the business licenses that have been pulled in the last few years are minority proprietors! In addition we know that Latino Health Access has also partnered with outside agitators from Los Angeles who are paying for baby sitters, feeding the agitators dinner and busing them in to Council meetings.

We strongly believe they will be in attendance at Tuesday’s meeting. It is safe to say there are enough passionate voices on this of people who live and work in town, we certainly don’t need outsiders to stir the pot. We deserve a downtown that is vibrant, creative, welcoming to all, unique and HISTORIC (Our downtown was the first OC Downtown to be placed on the National Register of Historic Places).

We deserve a downtown that is economically viable. Santa Ana’s reputation as an “Economic Reservation for the County” is not something to be celebrated. We are on the cusp of a terrific wave of upscale eateries and retail options. I encourage each of you as strongly as I can to either come down to the Council meeting this Tuesday at 5;45 pm and speak out on this dubious document called The Wellness Corridor. It will set us back as a community, it is a blueprint for failure both as a downtown and more importantly as a city.

If you are unable to attend the meeting, then please take a few minutes to send an email to the Clerk of the Council addressing the Mayor & Council Members at; mhuizar@santa-ana.org Please voice your concerns as Latino Health Access is going to fill the room with folks advocating for what sounds like a very wonderful and innocent resolution. But the document is a Trojan Horse filled with multiple schemes to keep our downtown divided, to lower the bar of expectations for our citizens and to create more economic hardship. This keeps the poor, poor…….and organizations like LHA in business pushing their brand of socialism. The City Council needs to hear from us that we have worked and supported our downtown and we like the way it is headed. We don’t need or want this resolution for economic cancer.