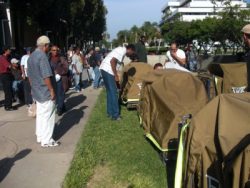 Many community activists in Santa Ana have openly wondered why the vacated OCTA bus terminal, at 405 W. 5th St., has not been used to provide temporary shelter for the many homeless who gather at the Civic Center every day. Now the County of Orange is finally in a position to make this happen as they are finalizing the purchase of the bus terminal, according to the O.C. Register.

The terminal will be purchased for $3.3 million dollars, which will include the terminal and a 473-space parking structure and a seven-story office building that will remain the headquarters of the Orange County Health Care Agency.

The OCTA opened the bus terminal in 1984 but stopped using it in 2008 instead of renovating it to fit the newly designed, natural-gas fueled buses that have become much of the OCTA’s fleet today.

The Orange County Supervisors have not yet decided what to do with the terminal, however Supervisor Andrew Do, whose district includes Santa Ana, is considering options to present to his colleagues when the sale of the terminal is finalized, most likely at the end of next month. 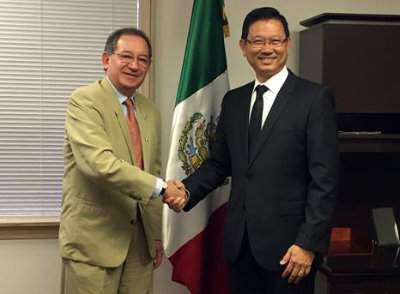 “Whether it be used to address homeless issues or not, I think it’s a good asset to have,” Do told the Register this week. “At this point, we’re not going to rule anything out.”

The County Supervisors also recently funded a new position that will oversee homeless issues in Orange County in a czar-type role. The Supervisors will allocate $160,865 toward the position of director of care coordination. That money will fund the job for the last seven months of this fiscal year. The job is available at a salary of $44.34 to $77.87 hourly.

Unfortunately for the Supervisors and the homeless community, the City of Santa Ana’s Planning Agency is on record as opposing the conversion of the terminal into a homeless shelter. The Planning Agency  sent a memo to former City Manager Paul Walters, in March of 2012, that you can read here, explaining in great detail their opposition to this idea.  Walters, in turn, sent that memo to the Orange County Board of Supervisors – who appear to have forgotten about it.

The memo makes it clear that the City of Santa Ana wants to do its share to end homelessness, but the OCTA bus terminal building simply is not an appropriate place to shelter the homeless, for a number of reasons, including:

The Supervisors also faced community opposition when they opted to open a year-round homeless shelter at a newly purchased warehouse on Kraemer Place in a light industrial zone in Anaheim. But that shelter was approved.

Do told the O.C. Register that he sees opportunities for the bus depot to provide at least temporary relief during the El Niño rains. It’s not a building with four walls, “but it is certainly better than nothing, which is what we have now in the Civic Center,” Do said.

But he said it’s important to differentiate between short-term and long-term use. The reasons people are homeless vary, “therefore the solutions will also need to be varied,” Do said.

Do is treading on thin ice as it is very likely that Santa Ana Mayor Pro Tem Vince Sarmiento will be running for Do’s Supervisorial seat next year. If substantial opposition to turning the vacated OCTA bus terminal into a homeless shelter arises it could cost Do his seat – if Santa Ana residents bother to vote in the next election.

The City of Santa Ana already stopped the Supervisors from building a homeless shelter in a working-class neighborhood on the East Side of the city.