The Costa Mesa police arrested Fernando Rodriguez Rabago, 24, whose last known address was Whittier, after an 8-vehicle traffic collision that occured at 19th and Newport Bl. in Costa Mesa on Monday, July 27, at about 10:48 a.m., per the Costa Mesa Police Twitter account.

Rabago was seen driving the wrong way on Newport Blvd.

Five people injured including a minor and several were transported to local hospitals for treatment. One person had to be freed from the wreckage of a disabled vehicle, according to the O.C. Register.

Rabago was arrested on suspicion of driving while intoxicated.

Earlier this morning dozens of police officers from different agencies formed two lines to honor Boyer, as his body was wheeled out between them and placed into the Orange County Coroner’s white Chrysler van at the UCI Medical Center in Orange, according to the O.C. Register. END_OF_DOCUMENT_TOKEN_TO_BE_REPLACED

Bad enough that so many of Santa Ana’s young people are getting shot in our city, now Arturo Morelos, a 17-year-old resident of our city has been found shot to death in Santa Fe Springs, along a set of railroad tracks, according to the O.C. Register.

A worker at a nearby business called police about 8:30 a.m. to report a “man down” along a set of side tracks servicing businesses near the 13700 block of Carmenita Road, according to the Whittier Daily News. END_OF_DOCUMENT_TOKEN_TO_BE_REPLACED 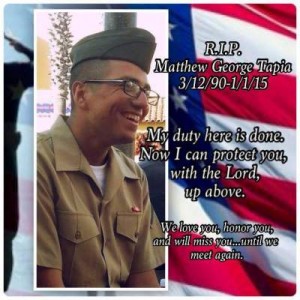 Tapia was the son of George and Anita Tapia, who are members of the Tustin Calvary Chapel Church.  He was home on leave from the U.S. Marines when the accident occurred. END_OF_DOCUMENT_TOKEN_TO_BE_REPLACED