The man was booked into the Orange County Jail by the Anaheim Police Department on Nov. 10, 2020, on multiple charges including lewd and lascivious acts with a minor, sodomy and assault to commit rape.

“We are deeply saddened by this loss of life and send our condolences to her friends and family during this very difficult time,” said Dr. Clayton Chau, Acting County Health Officer.

To date, there have been 833 COVID-19-related deaths in Orange County. There is currently no vaccine to prevent COVID-19 infection. The best way to prevent infection is to avoid being exposed to this virus. The Centers for Disease Control and Prevention recommends everyday preventive actions, including:

To find out more about how we can all work together to slow the spread of COVID-19, please visit www.ochealthinfo.com/protecteachother.

The firemen extinguished the car, which was burning in the driveway of a home. While firefighters were in the process of putting out the fire, they found a body inside the vehicle, according to ABC News. END_OF_DOCUMENT_TOKEN_TO_BE_REPLACED 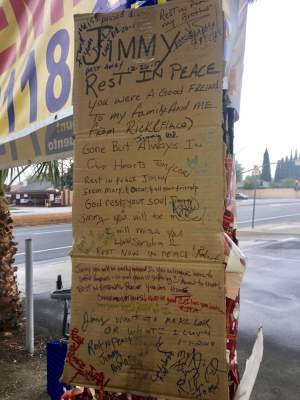 Last year, a Santa Ana resident who saw Jimmy living on the sidewalk along Warner Ave. reached out to the city asking them to help Jimmy get into a shelter. The city contacted Jimmy several times and he finally agreed to allow them to take him to the Courtyard shelter in downtown Santa Ana. Unfortunately, Jimmy only stayed at the shelter a short time, and decided to go back to Warner and Bristol. END_OF_DOCUMENT_TOKEN_TO_BE_REPLACED

Unintentional injury deaths primarily due to drug overdoses were the number one cause of premature death for young people (15-24 years old) and adults (25-44 years old). “The entire community has a role in promoting healthier behaviors, such as physical activity, smoking cessation, and the prevention of drug abuse in order to reduce premature deaths in Orange County,” said Dr. Eric Handler, County Health Officer. “Drug overdose deaths in particular are both tragic and preventable.” END_OF_DOCUMENT_TOKEN_TO_BE_REPLACED

On 5-28-2014 at approximately 1:20 AM, Santa Ana patrol officers responded to the apartment complex located in the 1300 block of North Harbor Blvd.

Residents of an apartment at that complex found their roommate deceased inside their apartment. END_OF_DOCUMENT_TOKEN_TO_BE_REPLACED

*Giving the homily was the man who replaced Fuentes as communications director, Lawrence Baird. Baird was a notorious asshole to many sex-abuse victims, defended vile pedophile Michael Harris as “an icon to the priesthood” to the media even as the Orange diocese knew he was a pedophile rapist, and even once sued a sex-abuse victim for defamation (he lost). Yet Fuentes wanted this man to give the homily? Birds of a feather… END_OF_DOCUMENT_TOKEN_TO_BE_REPLACED