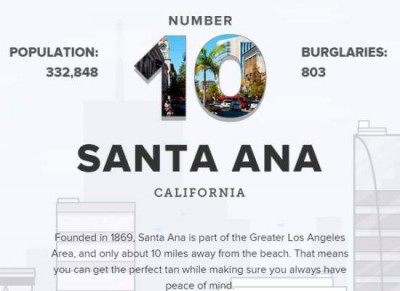 Protect America’s research team divided all US cities into categories based on size (small, medium, large) Santa Ana fell into the “small cities edition”, which covers cities with populations between 100,000 and 500,000 people. Protect America then analyzed burglary statistics provided by the FBI to determine what cities have the lowest burglary rates.  Santa Ana reported a population of 332,848 last year and 803 burglaries. END_OF_DOCUMENT_TOKEN_TO_BE_REPLACED

On Friday, February 6, 2015 at 1:15 pm, the Newport Beach Police Department arrested Thu Thao Thi Vu for a number of Commercial Burglaries committed in the City. Ms. Vu has also been tied to numerous other Commercial Burglaries in Orange, Los Angeles, Riverside, San Diego, and San Bernardino Counties. This arrest was made possible through the strong relationships between the Police Department and the Loss Prevention teams from our local department stores. END_OF_DOCUMENT_TOKEN_TO_BE_REPLACED 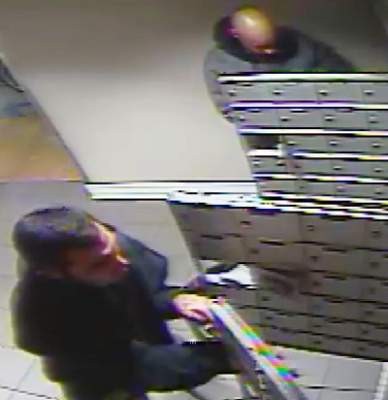 Three residential burglaries have occurred at 31 MacArthur Crescent (Pinnacle at MacArthur Place Apartments) in the City of Santa Ana since 1/31/15. The suspects entered the residential complex, burglarized residents’ vehicles in the parking area, and have stolen residents’ mail by breaking the lock of the mail distribution slots. END_OF_DOCUMENT_TOKEN_TO_BE_REPLACED

Over the last year, Sheriff’s investigators have been investigating several cases that include thefts of cash and jewelry from residences. As information and evidence was obtained, investigators determined the suspects were posing as housekeepers as a means of committing the burglaries without forcing entry into the residences. In the event the suspects were contacted by homeowners, they would pose as a legitimate cleaning crew. END_OF_DOCUMENT_TOKEN_TO_BE_REPLACED 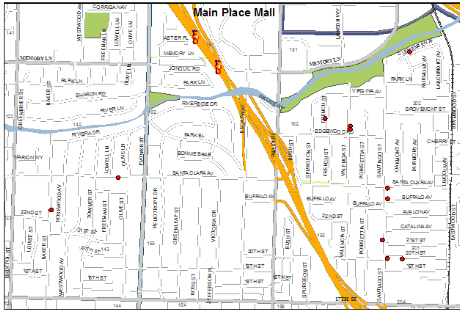 Since March, 2010, the Santa Ana Police Burglary Unit noticed an increase in residential burglaries around the North East area of the City (see map).

The burglaries occurred during the morning and early afternoon hours while the residents were typically at work and away from home. Several undercover operations were conducted and last week the Santa Ana Crime Scene Investigations Forensic Lab (CSI) identified a suspect through fingerprints left at one of the burglaries.

Yesterday on 8/18/10 SAPD Detectives conducted surveillance of the suspect, a 17yr old male, and made the arrest after he left his house. During their investigation 13 Santa Ana and 3 Garden Grove residential burglaries were connected to this suspect. Most of the victims have been contacted and some were able to recover property, including an expensive watch the suspect was wearing when arrested. He targeted homes with unlocked doors and windows. Additional burglaries and suspects are being reviewed at this time.

Jewelry and other expensive items were taken. The approximate value of the items stolen is over $100,000.