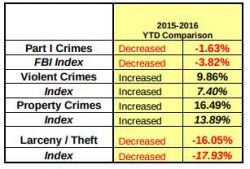 The Santa Ana City Council is lying about how crime is going down, according to statistics we recently obtained courtesy of the SAPD. Click here to see for yourself. But the biggest problem in our city is the ongoing onslaught of gang-related shootings. Shootings have increased in our city from 9 in 2013 to 42 this year – as of June, 2016, according to the data we received.

Violent crime has skyrocketed in Santa Ana. There were 26 shootings in our city last year. Consider these additional  miserable statistics:

Property crimes also went up since last year, by whopping 16.49%. But that number gets even worse when you consider that there were 1,368 property crimes in Santa Ana in 2013 and this year so far we have had 1,780 of these crimes in our city.

Have certain categories of crime improved? Sure. Larceny/Theft has gone down by 16.05%. But the worst crimes – violent and property crimes, have mushroomed in our city.

Some will try to blame Governor Jerry Brown for letting a lot of hardened criminals out of jail early. Others will point to the Three Strikes reforms, which also resulted in early release of a lot of criminals. But the reality is that while our City Council was overpaying our City Manager and handing out raises and bonuses to him and his fellow top executives, they failed to properly staff our police department, which now has the lowest level of staffing in our city’s modern history.

The net result is that Santa Ana has become a very dangerous place to live in a very short time – since the City Council majority took power and pushed our former Chief of Police, Paul Walters out, replacing him win the inexperienced new SAPD Chief, Carlos Rojas.

So what can we do? Well for starters please be careful about whom you decide to vote for in the upcoming November General Election. For example, Benjamin Vazquez, a mayoral candidate, wants to hire even less police! And Ward 3 City Council candidate David De Leon is supported and endorsed by City Councilman Roman Reyna, who recently voted against hiring more police officers. And incumbent Ward 1 City Councilman Vince Sarmiento has consistently voted with Reyna and has also not been supportive of public safety. Vote for these candidates at your own risk.

In contrast, Ward 3 candidate Jose Solorio is on record as saying that he wants to make public safety a priority in our city again and Ward 5 City Council candidate Juan Villegas, a member of the O.C. Sheriff’s Department for 26 years, supports hiring more cops. So does Mayor Miguel Pulido.

« A woman was caught in a gang crossfire on S. Standard this morning
Anaheim is on to FootGolf, why is Santa Ana asleep at the wheel? »