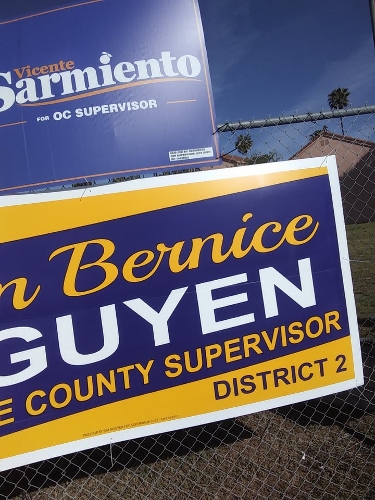 If there is one rule that Democrat candidates in Orange County must follow it is to buy campaign signs made at union print shops. Getting support from labor unions is a very big deal for Democrats in Orange County. So imagine the chagrin of local union members when they are discovering that Santa Ana Mayor Vicente Sarmiento is using campaign signs to promote his campaign for District 2 of the O.C. Board of Supervisors without the “union bug” seal of approval.

Sarmiento’s leading challenger from within the Democratic Party is Garden Grove City Council Member Kim Bernice Nguyen. Her campaign signs do have the union bug on them.

This is such a big deal that even Decline to State candidate Juan Villegas made sure his campaign signs were made at a union print shop!

This might be why so many of Orange County’s leading Democrats are NOT supporting Sarmiento for District 2. Instead they are jumping on to the Nguyen campaign including these elected officials:

Note that THREE members of the Santa Ana City Council are NOT supporting Sarmiento. Instead these Council Members, which include David Penaloza, Thai Viet Phan and Nelida Mendoza, are all backing Nguyen. What does that tell you?

Sarmiento may have sealed his fate in this race when he veered very far to the left after becoming Santa Ana’s Mayor in a race where he only garnered 33% of the vote. Sarmiento has since resorted to calling police officers murderers and passing a flawed eviction and rent control measure that angered many residents of Santa Ana.

You can learn more about Nguyen at www.votekimnguyen.com.