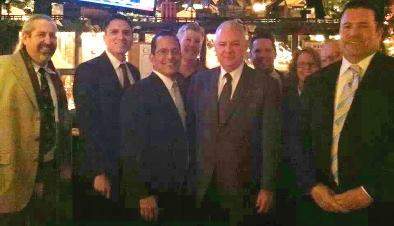 Trevino accomplished a lot in the City of Santa Ana during his tenure including: incorporating health and wellness into the planning process; emphasizing the quality of design in development projects; adopting award-winning plans like the Transit Zoning Code and the Housing Element; creating a balanced approach for affordable housing in the Housing Opportunity Ordinance; and, collaborating on the streetcar, to name a few of his many accomplishments.

Treveino tells me that the most satisfying part of his work has been in meeting and working with so many fine people – residents, businesses, non-profit organizations, and others. He says that “It’s also been a wonderful opportunity to have worked with so many talented staff, and great elected and appointed officials in Santa Ana. I am fortunate to have developed great friendships with the 33 other planning directors in Orange County cities, and in 2010 served as the president of the Planning Directors Association of Orange County (pdaoc.org). In my next chapter – my encore – I plan to work some, travel some, and play some.”

Santa Ana’s City Manager will soon be appointing someone to lead the Planning and Building Agency while the City recruits Trevino’s successor.

We wish Trevino the best going forward and thank him for his service to the people of Santa Ana.