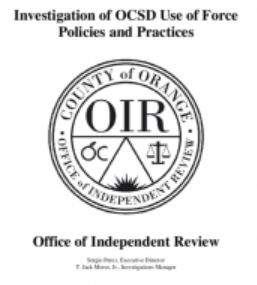 The report describes the investigation, its findings, and related recommendations. The OIR found that:

“The OIR’s investigation and report represent the realized promise of zealous and independent oversight of the county’s criminal justice system,” said Executive Director Sergio Perez. “If addressed through changes in policy and practices, the issues identified by my office will help secure more just and effective policing services for the people of Orange County.”

The report includes recommendations intended to improve OCSD policy and practices. Those recommendations touch on improvements to policy, better vetting and monitoring of trainers, and changes to the way force is reviewed, among other things. The report is available on the OIR’s website.