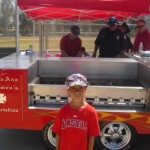 The 2011 Santa Ana Earth Day and Health Festival was a  big success.  It was held on Saturday, April 16, at Centennial Park.  Kudos to Santa Ana Parks and Rec Director Gerardo Mouet for putting on such a fun event!

There were dozens of representatives from Santa Ana city agencies, as well as many Orange County agencies.  Representatives of Supervisor Janet Nguyen, Congresswoman Loretta Sanchez, Assemblyman Jose Solorio and State Senator Lou Correa were also there.

There were also dozens of booths representing our local community organizations and charities.  And there were a lot of activities for kids!

Attendees were fed free hamburgers, cooked up by our friends from the Santa Ana Firemen’s Benevolent Association.  The VIPs got a lunch combo from Lee’s Sandwiches of Santa Ana, which included a delicious chicken sandwich, a cookie, fruit juice and chips.

The Santa Ana VIP basketball game featured members of the Santa Ana City Council, including Councilwoman Michele Martinez who helped to put the entire event together, and Mayor Miguel Pulido.  Many City Commissioners were in the game too including Sean Mill, a Planning Commissioner.

Check out the picture slide show above to see who was there!