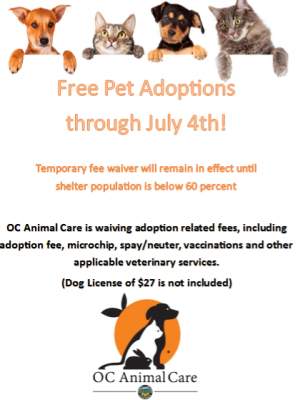 (Tustin, Calif.) – Due to an abundance of dogs, cats and other animals, OC Animal Care will begin waiving fees for pets adopted by residents across Orange County.

The waiver includes all regular adoption fees with the exception of a $27 charge for rabies licensing and will begin on June 29. The waiver will remain in effect until the capacity at the shelter drops below 60 percent.

The Orange County Board of Supervisors approved the Fee Waiver Resolution in 2016, which calls to forego regular adoption costs when shelter capacity reaches above 80 percent. The resolution also applies when the shelter is expecting to see a sharp increase in numbers such as that during the Fourth of July holiday.

OC Animal Care has been dealing with a busy kitten season and has seen an increase in overall intake numbers since moving into its new facility in Tustin.

Numbers have hovered around an 80 percent capacity and have now reached 93 percent.

OC Animal Care is also encouraging animal lovers to temporarily foster a shelter pet to help ease the load during the Fourth of July holiday. The days surrounding this holiday have historically been the busiest days for OC Animal Care, with intake numbers more than doubling due to escaped and lost, frightened pets. To protect pets who may get lost, OC Animal Care is offering free pet tags every Saturday in June, from 11 a.m. to 1 p.m. at 1630 Victory Road, Tustin 92782. “It’s important that pet owners know that a tag or microchip can be their pet’s ticket home” said OC Animal Care Interim Director Cymantha Atkinson.

O.C. woman ran over and killed a man she thought had tried to run over a cat