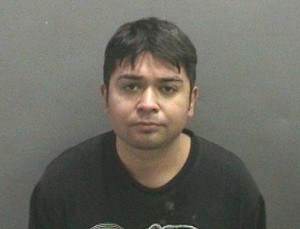 After midnight on April 29, 2015, the victim returned home and put their two children to bed before heading to the bathroom to get ready for bed. Cervantes, who was still hiding in the bathroom, is accused of immediately making her undress. He is accused of then forcibly removing her clothes and forcibly raping Jane Doe and then stabbing her three times in the head.

Shortly thereafter, Cervantes is accused of fleeing the scene in Jane Doe’s vehicle. The victim managed to reach a phone and contacted the Santa Ana Police Department (SAPD), who investigated the case.

That same day at approximately 7:00 a.m., Jane Doe’s vehicle was found in Anaheim.

On April 30, 2015, at approximately 6:45 p.m., SAPD officers located Cervantes in Fullerton and arrested him.

« Bicyclist struck and killed by a car in Santa Ana, near an I-5 Freeway on-ramp
Santa Ana man busted for pimping and pandering a woman and trying to traffic a girl on FB »