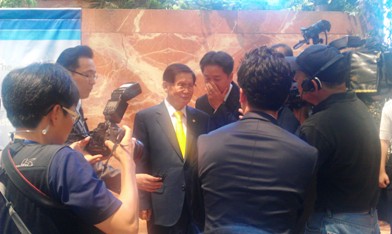 UPDATE: According to Eric Lee, “We had over 600 request to follow up and learn more about the instructor and also the fulfillment of Revelation.”   Click here to see the official event follow-up press release.  And click here to see more pictures taken at this event.

I visited the former Crystal Cathedral today (it is now knows as Christ Cathedral), where throngs of mostly young Koreans and other believers came together to listen to the ministry of Instructor Man Hee Lee, a self-avowed expert on the Book of Revelation.

There had been some consternation in the week leading up to the event as a number of evangelical Christians complained that Lee is the head of a cult.  One woman at today’s service even ran up to the front of the church and started yelling.  She was quickly removed although Lee asked that she be allowed to speak – in the lobby. 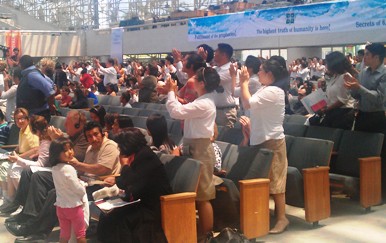 The sermon was in Korean, but we were all given headsets and the sermon was translated into several languages including English and Spanish.

Lee was born in Korea in 1931, which means that he is 81 years old – and I have to say he looks pretty well kept for being in his eighties.  Lee claims a lineage that can be traced back for 500 years.  That may sound like a lot but Korea is an ancient country.   He also says that he was visited by Jesus himself, in Korea, and that he “saw and heard the events of Revelation.” 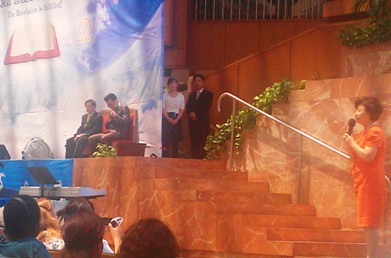 Lee’s lineage dates back to the Joseon empire, according to Wikipedia, which is when bronze making techniques were imported from China, according to PBS.  Koreans created the first world’s first metal moveable type in the 12th century.  By 1522, the German preacher Martin Luther was printing the first Bible’s produced on such presses, according to Wikipedia.  Lee referred to Luther today when he repeatedly admonished those at the service to read the Bible.

While urging followers to read the Bible fits in nicely with leading Evangelical thought, Lee does hold a controversial position in that he believes we are already “fulfilling Revelation.”  But his take on Revelation is not like anything I have heard before.  For one thing, Lee is expert at translating the book of Revelation in terms of analogy.  He sees much of the text as symbolizing ideas. 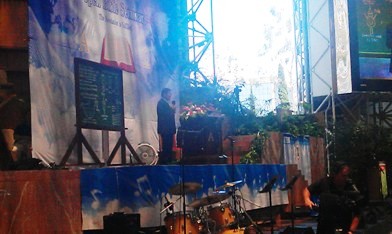 During the sermon Lee patiently made his way through each chapter of the Book of Revelation, explaining what he feels the symbols mean.  While he has been critized as a false prophet, he took false prophetst to task during his speech.

So are we in the end times?  That is hard to say.  There is no mistaking that we live in dark times considering all the unrest and death in the Middle East, and the horrible shooting here in the U.S. just this week, at a screening of the new Batman film in Aurora, Colorado.

I had a chance after the sermon to ask Lee about the Aurora shooting – and about the increase in atheism among our youth.  Lee paused then answered firmly in Korean that we need to be knowledgable in the Bible and that this is especially true of our young people.