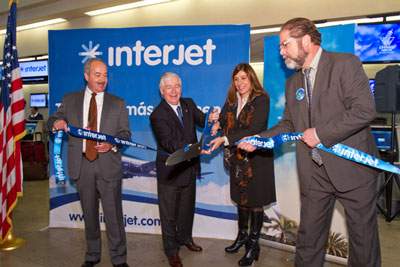 “Interjet is very pleased to commence service from Orange County to two Mexican gateways – Mexico City and Guadalajara – which are popular destinations for Southern California business and leisure travelers. In addition, Interjet’s Orange County flights to Mexico City provide the most convenient same-day connections to over 23 Mexican gateways served by Interjet which will make travel to Mexico even easier. We look forward to providing our Southern California friends with the quality service and appealing amenities that travelers from other parts of the U.S. already enjoy,” said Jose Luis Garza, Interjet’s CEO. In addition to its U.S. gateways, Interjet’s international route structure currently includes Guatemala, Cuba, and San José, Costa Rica.

“The OC tourism industry is absolutely thrilled with the new service by Interjet to two cities in Mexico. As John Wayne Airport, Orange County continues to expand its air service to new international markets; Mexico is a natural and critical market for the region’s success,” said Gary Sherwin, Chairman of the Orange County Visitor’s Association. “We welcome Interjet to the OC family and look forward to extending our famous OC lifestyle brand to all of its passengers and providing them with an exceptional experience.”

Interjet earned its reputation as one of Mexico’s most successful airlines based on numerous passenger-pleasing flight and service features. Interjet is known for its high quality service at competitively affordable prices as well as its excellent safety record. With 35 new A320 aircraft, the airline has put the customer first with such decisions as removing 30 seats to create maximum comfort for 150 guests as well as serving complimentary snacks and premium beverages during flights between Mexico and Orange County. Interjet also offers transferable tickets, an appealing frequent flier loyalty program, in-flight entertainment program, an unrestricted 20 percent discount year-round for seniors, a unique take-off/landing camera and women-only toilets on all airplanes. In contrast with other carriers, there is no extra charge for passengers to select seats or check up to two 55-pound bags per ticket. Interjet does not overbook its flights and has no hidden fees in the ticket purchase prices; the price offered by the airline is what the customer pays, including all taxes.

Reservations can be made online at www.interjet.com or through your travel agent.

About Interjet
INTERJET is a 100% Mexican airline which, in December 2011, celebrated its 6th anniversary by fulfilling a corporate commitment to provide high-quality air travel at an affordable price. Its current fleet consists of 35 state-of-the-art Airbus A320 aircraft with the latest in aeronautical technology. They are also the only aircraft of their kind in Latin America that are equipped with external cameras, which allow the passengers to see live take-off and landing from their seats. Interjet operates over 150 daily flights on 42 business and leisure routes, covering 26 destinations in Mexico and seven international destinations – Guatemala, Havana, San Antonio, Miami, San José (Costa Rica), New York and now, Orange County. Interjet’s network also offers excellent connections to other destinations at the airport in Mexico City. For further information and reservations, consult www.interjet.com or call 866-285-9525.

About John Wayne Airport
John Wayne Airport (SNA) is owned by the County of Orange and is operated as a self-supporting enterprise that receives no general fund tax revenue. The Airport serves approximately nine million passengers annually and reaches more than 20 nonstop destinations in the United States, Canada and Mexico. More information can be found at www.ocair.com or at facebook.com/johnwayneairport or twitter@johnwayneair.