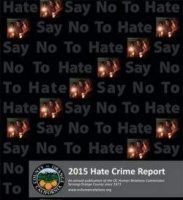 “Hate will not be tolerated in Orange County,” said Supervisor Todd Spitzer. “I want to raise my family in a culture of respect and caring.”

The 2015 Hate Crime Report findings: reported hate crime is up and the primary targets still remain. Since 1995, the Commission has collected, tracked, reported and responded to OC’s hate crimes. Three general observations about the report for this year (2015):

The OC Human Relations Commission, on behalf of the OC Board of Supervisors, OC Sheriff’s Department, city police departments, and the diverse residents of this community stand in unity to say,