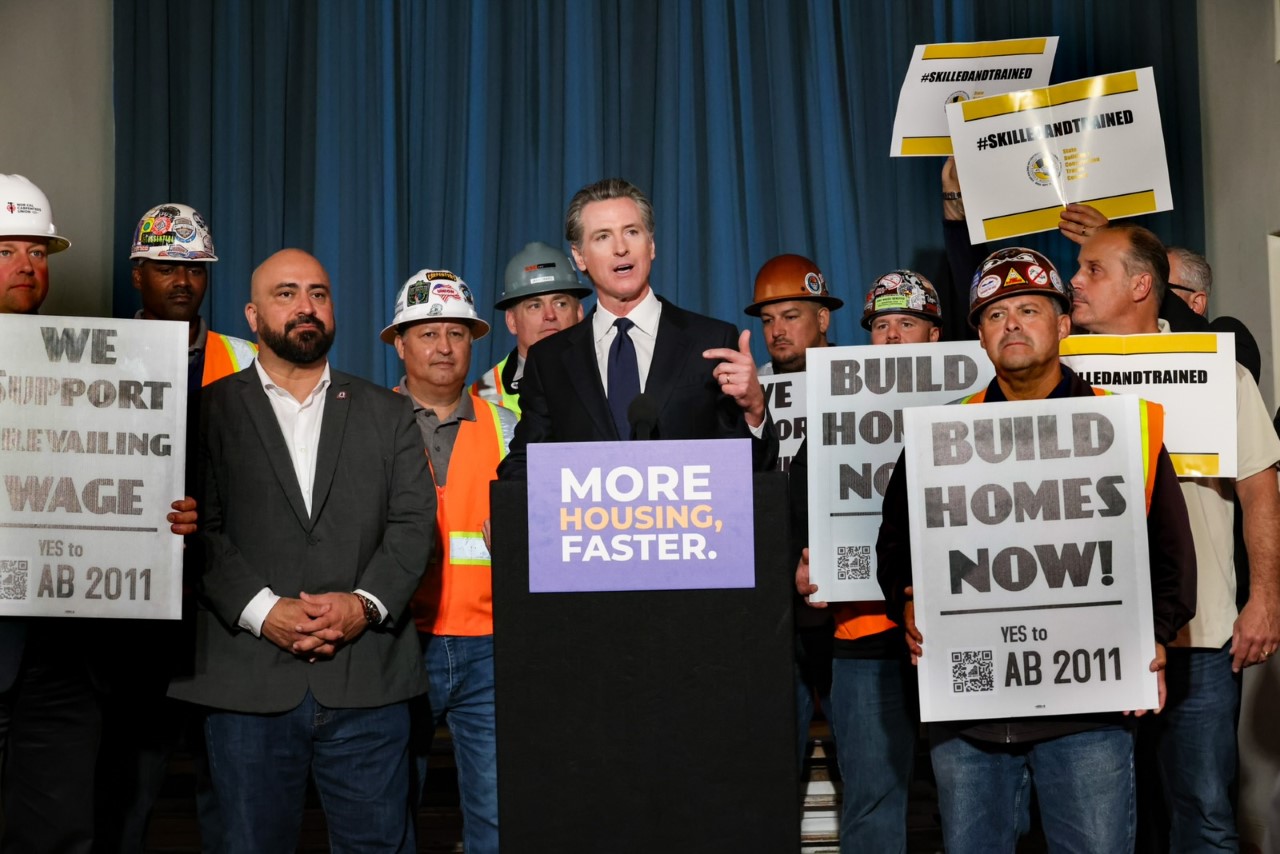 “California has made historic investments and taken unprecedented actions to tackle the state’s housing crisis over the past four years,” said Governor Newsom. “But we recognize there’s more work to do – this package of smart, much-needed legislation will help us build new homes while rebuilding the middle class. I’m thankful for the leadership of the Legislature for stepping up to meet this moment to help address the affordability crisis that stretches across the entire nation.”

Governor Newsom signed the housing package alongside legislative, local, housing, and labor leaders, at the future site of an affordable housing community in San Francisco.

“SB 6 and AB 2011 are game changers when it comes to producing desperately needed housing for all income levels,” said Senate President pro Tempore Toni Atkins. “These two bills are the culmination of many years of work to find solutions that streamline the regulatory process and ensure that workers building homes are being paid a fair wage. I applaud Senator Anna Caballero and Assemblymember Buffy Wicks for their dynamic teamwork and tireless dedication to serving their communities, and our state. I’m grateful to Governor Newsom for signing these bills, and to Senate Majority Leader Mike McGuire, Speaker Anthony Rendon, and our labor partners for helping make this victory possible. With these laws in place, we will soon see more building and more jobs, and more families will be able to achieve the California Dream.”

“Today’s signings demonstrate that we can make real progress on improving California’s housing outlook, despite the many challenges we face,” said Assembly Speaker Anthony Rendon. “In particular, AB 2011 shows what can be accomplished when disparate advocates team up on a critical goal. And, of course, the Assembly is proud to have been able to team up with the Senate and the Governor to make this all a reality.”

AB 2011 by Assemblymember Buffy Wicks (D-Oakland) and SB 6 by Senator Anna Caballero (D-Merced) together will:

“The Middle-Class Housing Act or SB 6 can result in the construction of at least 2 million housing units and is one solution to build up and avoid sprawl,” said Senator Anna M. Caballero. “SB6 gives local governments the option for an expedited development process to avoid the property remaining vacant.  SB6 includes strong worker protections to ensure that homes built under SB6 pay workers fair wages and prioritizes the use of a skilled and trained workforce. The bottom line is that SB6 is transformational for cities and middle-class families which coupled with historic state investments, families will have a real chance at being able to buy a home of their dreams.”

“Today we are taking a monumental step in our efforts to turn our housing crisis in a different direction,” said Assemblymember Buffy Wicks. “The Governor’s signature on AB 2011 marks a turning point for California’s housing production needs — no longer will lack of land be an issue. No longer will there be a lack of incentive for workers to join the construction workforce. And, no longer will red tape and bureaucracy prohibit us from building housing in the right locations to address our climate crisis.”

“This legislation will help create millions of desperately needed new homes and protect the workers who will build it,” said Doug McCarron, General President, United Brotherhood of Carpenters. “Importantly, it will give the workers an opportunity to afford the housing they’re building. I want to commend Governor Newsom and the California State Legislature for advancing this ambitious and necessary housing package.”

The Governor also announced that the Department of Housing and Community Development is awarding $1.02 billion in funding for the second round of the California Housing Accelerator, providing funding to 30 shovel-ready projects whose financing has been stalled because they have been unable to obtain tax credits. These new awards will help get construction underway quickly for 2,755 new housing units throughout the state. To date, $1.9 billion in funding for the California Housing Accelerator has been awarded, supporting a total of 57 projects to produce a total of 5,071 units. The vast majority of these units will be for extremely low to very low-income households and unhoused residents, and will provide affordable homes for seniors, families, transitional-age youth, veterans, people with disabilities, essential workers and unhoused individuals.

Last year’s California Comeback Plan invested a historic $10.3 billion – by far the most ever invested in housing – into a comprehensive housing affordability strategy, while also implementing new laws and accountability measures. Building on these unprecedented efforts, this year’s budget invests an additional $3.3 billion for affordable housing production and homeownership opportunities.

A full list of the bills in the housing and homelessness package can be found here:

For full text of the bills, visit: http://leginfo.legislature.ca.gov.