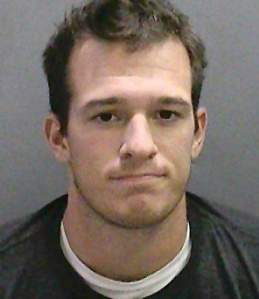 SANTA ANA – A former Marine has been charged with illegally bringing a non-lethal grenade, knife, and other military materials into John Wayne Airport (JWA) by checking them in his bag and carrying them on his person. Gregory Thomas Salyer, 23, Independence, KY, is charged with one felony count of placing a destructive device in a checked baggage, two felony counts of possession of a controlled substance, one felony count of receiving stolen property, and one misdemeanor count of carrying a switch-blade knife on his person. If convicted, he faces a maximum sentence of eight years in state prison. Salyer is being held on $500,000 bail and is expected to be arraigned today, Thursday, Aug. 29, 2013, in Department CJ-1, Central Justice Center, Santa Ana. The time is to be determined.

On Aug. 27, 2013, Salyer is accused of entering JWA for a flight to Denver and checking baggage containing a non-lethal sting ball grenade, two military electric artillery time fuses (used on military artillery rounds), one military fuse assembly, and a butterfly knife. He is also accused of being in possession of over 300 steroid pills and over 10 Adderall pills.

Salyer is accused of being identified as the owner of the checked bag and was arrested in the departure area of the airport. A Marine Corps Chief Warrant Officer removed the grenade and fuses from the airport for disposal.