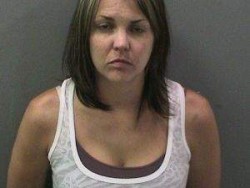 SANTA ANA, Calif. – A drunken driver is scheduled to face trial on Monday for murdering a 5-year-old girl and severely injuring the child’s sister and mother by crashing into them in a crosswalk after driving through a red light. Jessicah Louise Cowan, 37, Lake Hughes, is charged with one felony count each of murder, vehicular manslaughter with gross negligence while intoxicated, hit and run with permanent injury or death, hit and run with injury, two felony counts of driving under the influence causing bodily injury, two felony counts of driving with a blood alcohol content of .08% or more causing bodily injury, and an infraction for possession of marijuana while driving. Cowan also faces allegations and sentencing enhancements for causing bodily injury to Eloisa M. and Grisea M., having a blood alcohol content of .20 % or more, fleeing the scene of a vehicular manslaughter, and causing great bodily injury. If convicted, she faces a maximum sentence of 15 years to life in state prison. Opening statements are scheduled to begin Monday, April 4, 2016, at 9:15 a.m. in Department C-35, Central Justice Center, Santa Ana.

« Over 180 bilingual volunteers needed for a Santa Ana Citizenship Fair on 4/9
Amber Alert issued as violent and dangerous suspect from L.A. kidnaps his child »