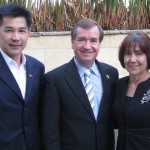 5 thoughts on “Does it really matter that Lucille Kring got more votes than Lou Correa on Tuesday?”