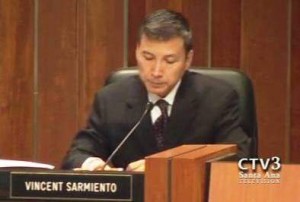 So what is the verdict?  Sarmiento is not very present in his own Ward but he is pretty darn active compared to several of his colleagues.  And so far Sarmiento is the ONLY Council Member to attend a neighborhood association meeting, or meet with their members at any rate, of those whose calendars we have reviewed.  But you have to wonder when this guy finds time to be a lawyer?  He was active on 19 days in June, which means he was twice as busy as Reyna and Amezcua.