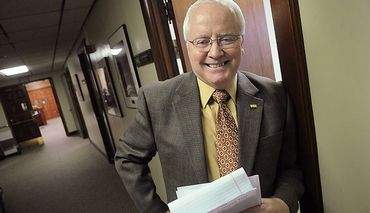 Kevin O’Rourke, a retired government executive with two decades of experience in Orange County was appointed Monday by the City Council as Santa Ana’s interim city manager,” according to the O.C. Register.

We reported this was going to happen way back on Feb. 5.

O’Rourke has made a career of serving as both an interim and permanent city manager, with stops in Buena Park, Stanton and Stockton, which filed for municipal bankruptcy last year.  Stanton seems to be headed for the same result too.  He last temped in Woodland, according to a media report, in 2011.  And surprise!  He temped in the City of Bell too.

The Register also reported that “Councilwoman Michele Martinez noted that O’Rourke is fluent in Spanish,” which is ironic as she is not fluent in Spanish herself, although she does speak Pocho.

O’Rourke currently works with a consulting business that specializes in helping broke cities to figure out how to pay for their public employee pension debt.

He is also a board member of Cal-ICMA, which is a collaboration of the League of Cities City Managers’ Department (CMD); the California City Managers Foundation (CCMF); the two assistants groups (MMANC and MMASC); the County CAOs; the COG Directors; along with members of the academic community and from all of the other ICMA membership categories

Up next for O’Rourke?  He has to figure out how to pay back the “$54 million in housing funds that are a result of the dissolution of redevelopment, development of a city strategic plan and budget, and labor negotiations.”  Good luck with that!

How long before the Santa Ana City Council realizes that, after outsourcing our fire department, they now need to outsource our cops too – to the Orange County Sheriff’s Department?  The irony is that the current Sheriff, Sandra Hutchens, is reportedly going to retire and not run for re-election in two years, due to health concerns.  One of the leading candidates to replace her will surely be Paul Walters, who was fired by the Santa Ana City Council for no good reason but will continue to serve as our Santa Ana Police Commissioner.

So Walters could end up running the SAPD after all – after he becomes the next Sheriff and the SAPD gets outsourced to the Sheriff’s Department.

As for O’Rourke he will make a small fortune for temping in Santa Ana and eventually the City Council’s national city manager search will result in them hiring the guy they wanted to make our interim city manager all along – Gerardo Mouet, our Parks and Recreation Agency Director.  Mouet didn’t get the interim gig because we reported that this was going to happen, so now we get O’Rourke, who can apparently say “si se puede,” to Martinez’ delight.

Update: I just got the City’s official press release regarding O’Rourke’s hiring.  Here it is:

SANTA ANA, CA (February 11, 2013) – The Santa Ana City Council announced at its special meeting this evening that retired City Manager Kevin O’Rourke has accepted its offer to serve as Santa Ana’s Interim City Manager. O’Rourke served in numerous management positions, both in Northern and Southern California cities before serving most recently as a Senior Consultant with the Public Alternative Retirement System. He has valuable interim experience resulting from his service as Interim City Manager of the City of Stockton in 2010 and the City of Woodland in 2011-12. Mr. O’Rourke also served as City Manager for the cities of Buena Park and Stanton in the 80’s and 90’s. He served as city manager for more than ten years in the City of Fairfield before his retirement at the end of 2007. “I’m excited about returning to Orange County and serving Santa Ana’s community,” said O’Rourke.

In addition to the lengthy list of management positions, O’Rourke has served in prominent professional positions. He is a past-president of the League of California Cities City Manager Department and a past Member of the League’s Board of Directors. On the national level, O’Rourke also served on the International City/County Management Association’s Executive Board, as the Vice President of the West Coast Region.

The Santa Ana City Council noted O’Rourke’s experience in working in Orange County and his leadership experiences as significant factors in his engagement. Mayor Pulido said, “We are very fortunate to have his incredible experience and familiarity with the Orange County region.” O’Rourke has handled financial challenges, managed numerous development and transportation projects and is very familiar with the many challenges that the winding down of redevelopment agencies presents. Santa Ana is processing the street car project, various development plans and is maneuvering through the Department of Finance dissolution process while committing itself to the completion of much needed affordable housing projects. “Kevin is the right person for us at this time and we are confident that he will help us position the City to find the very best permanent City Manager in the near future,” said Councilwoman Martinez.

Mr. O’Rourke received his undergraduate degree from LaSalle University. He participated in two masters programs. The first was the Master’s of Divinity at the Washington Theological Coalition. The second was the Masters of Public Administration at the center for Public Policy; Cal State Long Beach. He is also fluent in Spanish.