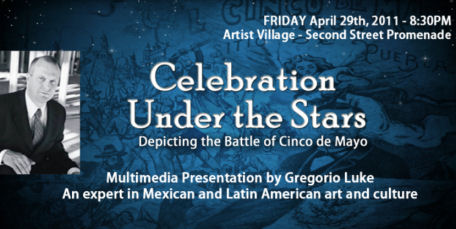 Don’t miss the “Cinco de Mayo Under the Stars” multimedia presentation Illustrating the Battle of Cinco de Mayo, by Gregorio Luke, an expert in Mexican and Latin American art and culture, at the Second Street Promenade (2nd St. between Broadway & Sycamore), on Friday, April 29, at 8:30PM.

This is a free event sponsored by Downtown Inc.

Gregorio Luke is an expert on Mexican and Latin American art and culture. Mr. Luke has presented over 1,000 lectures in museums and universities throughout Mexico, Europe and the United States in institutions such as the Library of Congress, The Smithsonian Institution, the San Diego Museum of Art, the Detroit Institute of Art, and Universities such as Harvard, Columbia, UNAM and Georgetown, among others.

He is the former Director of the Museum of Latin American Art in Long Beach, former Consul of Cultural Affairs of Mexico in Los Angeles and the First Secretary of the Embassy of Mexico in Washington D.C.

In 1995, Luke was honored with the Irving Leonard Award by the Hispanic Society of the Library of Congress. In 2005, The Ebell Club of Los Angeles honored him with a Life-time Achievement Award. In 2006, Luke received the El Angel Award by the Bilingual Foundation of the Arts and in 2007 he was recognized by CATE (California Association of Teacher’s in English) for promoting literacy in public schools.

In 2008 he received the Local Hero Award of KCET.

« Race to “Heel Hunger,” on Friday, in Tustin
One year anniversary of Pudding, tonight at Proof »