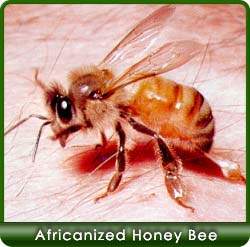 The SAPD’s Animal Services Section was called to the home of Linnea Chapman, in the 2200 block of North Olive Street, in the West Floral Park Neighborhood Association, at about 1:30 p.m. with a report that three dogs were dead and might have been killed by bees, Cpl. Anthony Bertagna of the Santa Ana Police Department said, as reported by KTLA News.

A bee specialist determined that the bee hive was in a shed in an adjoining property.  The dogs were riled up by a pool cleaner and the noise they made prompted the bee attack.

The dogs were apparently placed behind their home, in the yard, because of work being done in the front yard.

The owner of the house hired someone to remove the hive.  She said she and her husband don’t have children and the dogs, Bartlett, Bailey, and Remy, were like family, according to NBC News.

This attack by the bees was not how normal honeybees behave.  It is likely that the culprits were Africanized bees.

For information on the removal of problem bees, contact a private pest control specialist