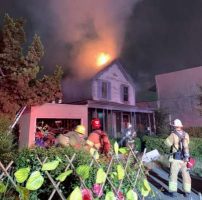 OCFA firefighters battled a heavy fire just two doors down from fire station 72 in Santa Ana, at a two-story residential house at the 1600 blk. of E. 4th St., across the street from the home of Santa Ana Mayor Vince Sarmiento, at approximately 11 p.m. last night.

There was heavy fire damage on both floors and a weakened building so the fire crews were in a defensive mode which means they were trying to limit the spread of the fire.

The fire was finally extinguished early this morning. The firefighters then overhauled the house to ensure that all the hot spots were out.

OCFA fire investigators were at the scene as well.

The SAPD provided assistance with regard to closing off the street so the fire crews could work safely.

« The Costa Mesa Police will be conducting a DUI checkpoint this Friday, June 4
Pink-haired theft suspect nabbed by the Costa Mesa police »