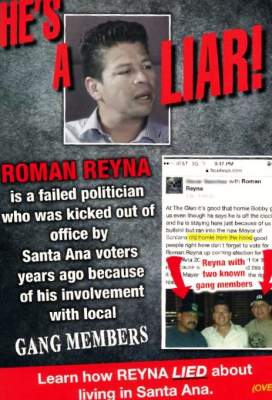 As one might expect his detractors don’t want to see him get back onto the City Council. To that end a blistering mailer arrived in our mailboxes yesterday. It reminded voters about Reyna’s past gang connections and then endeavored to explain the intricacies of Reyna’s carpetbagging. 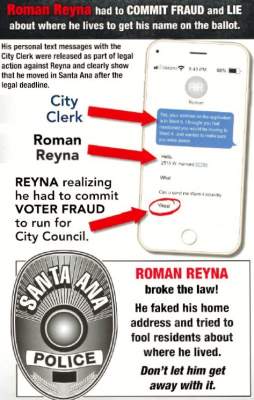 The mailer includes a representation of an actual text conversation that occurred between Reyna and the Santa Ana City Clerk wherein she advised him that he had applied to run as a Ward 4 candidate while using a Ward 6 address. Ruh roh!

Reyna then asked the City Clerk for a copy of the city’s ward map and he responded with “Yikes!”

The mailer closes out by stating that Reyna broke the law – he faked his home address and then tried to fool residents about where he lived.

Now in truth Reyna got away with this as a Judge refused to remove him from the ballot. But the truth is that he engaged in some major shenanigans while in the process of carpetbagging in Ward 4.

Reyna’s opponent, former Planning Commissioner Phil Bacerra, has been reeling in recent weeks from a smear campaign orchestrated by Reyna and his backers involving a former girlfriend that is alleging that Bacerra was abusive. Of course none of her complaints can be corroborated and no other woman has emerged to say that Bacerra, who is now married to his childhood sweetheart, is a bad guy. It is also worth noting that Bacerra’s ex did not raise these issues when he was appointed to the Planning Commission. Instead she waited until she could do the most damage to him.