Notice: Undefined variable: remote_version in /home/newsantaana/public_html/wp-content/themes/ifeaturepro5/functions.php on line 417
 New Santa Ana | Updated: Why do we know so little about the attack on a young woman at The Crosby?
Santa Ana's top news & views blog 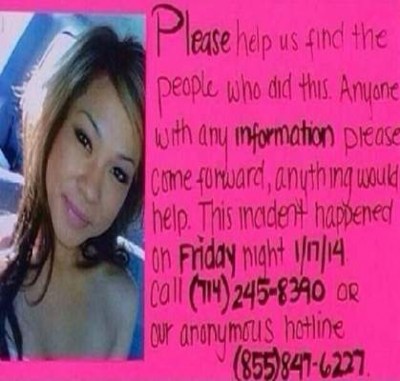 I have to wonder if the victim of the attack was Asian.  A Korean fellow from Irvine was killed a couple years ago after partying at the Proof Bar, which is located not far from The Crosby in Downtown Santa Ana.  Are these attacks racially motivated? 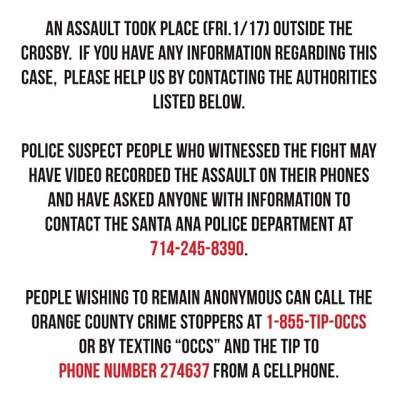 And should we have seen this coming?  Go to Yelp and you will see that many folks have complained about the lack of seating at The Crosby and the long lines to get in.  One commenter on Foursquare summed it up this way, “Don’t go on Saturday nights.” The young lady in question was attacked on a Friday night so that commenter may want to amend his comment.

Other questions I would like to see answered include:

The victim is on life support, according to comments left on The Crosby’s Facebook page. UPDATE: One of our readers commented that there are now memorial signs at the site of the beating that indicate she has passed away from her injuries.

If you have any information about this attack please contact the Santa Ana Police Department at 714-245-8390. People wishing to remain anonymous can call the Orange County Crime Stoppers at 1-855-TIP-OCCS or by texting “OCCS” and the tip to phone number 274637 (C-R-I-M-E-S) from a cellphone.

149 thoughts on “Updated: Why do we know so little about the attack on a young woman at The Crosby?”