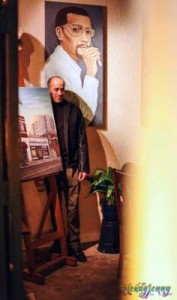 Southgate was taught painting by the legendary Emigdio Vasquez and also studied art at Santa Ana College. He’s been active in the Santa Ana arts scene for over 20 years, exhibiting at the Caged Chameleon Gallery in the 80’s, which DIEGO’S chef Richard Espinachio used to run, as well as in the Bowers Museum, OCCCA, and his infamous Studio del Sotano gallery in the historic Santora basement. A skilled muralist, portrait painter and sign-maker, Matt has also been active in local politics, advocating for Artists with the Artists Village Association of Santa Ana (AVASA) and United Artists of Santa Ana (UASA). His guiding vision has been to preserve the historic Santora Arts Building, Artists Village and DTSA as cultural hubs by providing Artists and Arts Businesses with the support needed so they can continue showcasing Santa Ana’s unique history.

Don’t miss THIS SATURDAY @ Diego’s for August ArtWalk. There will be food & drink specials all night!

« Could the One Broadway Plaza Tower save the DTSA food and arts scene?
OC NORML to host a meeting about the SAPD raids on medical marijuana dispensaries »