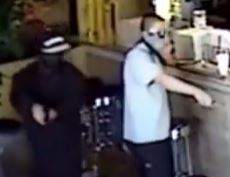 On Monday, 11/21/2016 at 3:15 pm, a male Hispanic entered the M & Toi Café , located at 4702 W. 1st St., in Santa Ana, and sat down at the bar. After several minutes the male appeared to text unknown person(s) and approximately a minute later, two male suspects wearing bandanas to cover their faces entered the business armed with a handgun and a knife. The suspects demanded the female victim to open the register. The lone male Hispanic seated at the bar then walked around the back of the counter, removed the money from the register and fled along with the two armed suspects. The loss was US Currency. 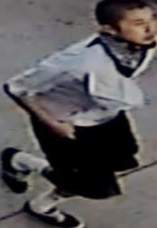 Anyone with information on the identity of this suspect is asked to contact Detective A. Garcia #3233 at 714-245-8408 or email agarcia3@santa-ana.org or Orange County Crime Stoppers at 1-855-TIP-OCCS.