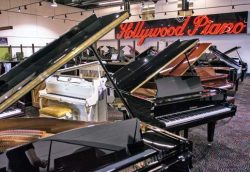 Hollywood Piano Company’s Santa Ana store is celebrating a Grand Opening at the MainPlace Mall. They will occupy Suite 280.

Hollywood Piano provided the pianos used in the classic film Casablanca. For years they have had one of these pianos in storage but they have fully restored it for this event! It will be unveiled at the grand opening with the help of some special guests.

The Hollywood Piano Company was not a grand scheme or plan, it was born from circumstance when Russian immigrant Abe Tishkof ( Hollywood Piano founder) was in the construction business and had a client who couldn’t afford to pay for work on a building Abe built for him. He told Abe he was leaving for Buffalo and he had 300 pianos he could offer in lieu of payment. With no choice Abe took all of the pianos. At first he didn’t know what to do with all of these pianos. He had them everywhere on his property, in his house and his office.

ne day one of his neighbors asked him if she could “borrow” one of his pianos for their children to take lessons on. Abe let her have it for $2 per month. Another neighbor heard about it and she also got a piano from Abe for $2 per month, then another and another, and soon a Hollywood institution was born.

The initial location was in Abe’s offices on 8th street, then within a year at Western Avenue and shortly after that to the landmark Highland Avenue location below (which he eventually purchased) where the historic, iconic Hollywood Piano neon sign was put up and lit for the first time.

It was only natural for the movies to come knocking on the door of the new company for those new “talkies”. Within no time the Hollywood Piano Company was not only supplying families with pianos, but also became the key supplier of pianos to the burgeoning motion picture industry. The history of the motion picture industry and the history of the Hollywood Piano Company are closely tied together.

Many customers of the early years included the major Hollywood Studios and such motion picture luminaries as Charlie Chaplin, Laurel and Hardy, Norma Talmadge, Cecil B. De Mille, Walt Disney, and Louis B. Mayer.

Over the years the original landmark Highland location was a magnet for the biggest stars of the day. Where do you think Marilyn Monroe and Jane Russell went right after they put their hands in cement back in 1952 at Grauman’s Chinese Theater? They walked around the corner and came into the Hollywood Piano Company.

Frank Sinatra was regular customer of the store often buying pianos as gifts for his friends. It was not rare to find stars such as Frank Sinatra, Tony Bennett, Vic Damone, all hanging out in the store at the very same time. Otto Preminger even used the store as a set for a movie.

With the advent of television Hollywood Piano was supplying some of the biggest names in the business. The pianos used by Lucy and Ricky were provided by the Hollywood Piano Company as was the famous piano used at the beginning of every episode of “All In The Family” when Archie and Edith sang “Those Were the Days”. For many years Hollywood Piano supplied many of the piano prizes on “Let’s Make A Deal” with Monty Hall and other game shows of the day. In more recent years you’ve seen pianos from the Hollywood Piano on Frasier, Will and Grace, Desperate Housewives, 2 ½ Men and Dirty Sexy Money, Glee, Dancing with The Stars, American Idol and The Voice to name only a few.

2 thoughts on “The Hollywood Piano Company will celebrate their Grand Opening at the MainPlace Mall on Nov. 18”