The “Green Gaiter” bandit is wanted for robbing 14 banks in L.A. and O.C. 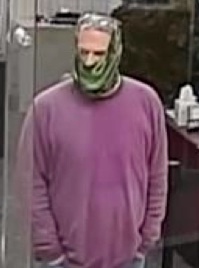 An unidentified suspect who investigators believe conducted at least 14 bank robberies or attempts in Orange and Los Angeles Counties since October is being sought by the FBI and multiple law enforcement partners whose officers and detectives responded to the banks with agents in various cities.

The FBI has given the suspect the moniker, “Green Gaiter Bandit,” based on the green face/neck covering he can be seen wearing in some bank surveillance photos, which are being provided to the public. It should be noted that the suspect wears a variety of gaiters covering his neck and face in different banks on different dates, including a green one. He has also worn gaiters or a mask in other colors or designs as witnesses have described and as bank surveillance photos illustrate.

Over the past three months, the Green Gaiter Bandit is suspected in the following bank robberies or attempts, including on Christmas Eve and New Year’s Eve:

The Green Gaiter Bandit has been further identified as a white male, between 50 and 60 years old, approximately 6’0″ tall, with a medium to heavy build and gray hair. In some of the bank robberies, the suspect is wearing a tan jacket. He wears a variation of workwear-style clothing and, as noted, a variety of gaiters covering his neck and face, including a green one.

During the robberies, the suspect typically approaches a victim teller and either passes a note or makes a verbal demand, or both. In some cases, the suspect verbally demands cash or the “loose bills.” After receiving the cash or an attempt, the suspect has been seen fleeing the bank on foot.

If anyone has information about the identity or the whereabouts of the Green Gaiter Bandit, please contact law enforcement. In Los Angeles and Orange Counties, the FBI can be reached at (310) 477-6565.