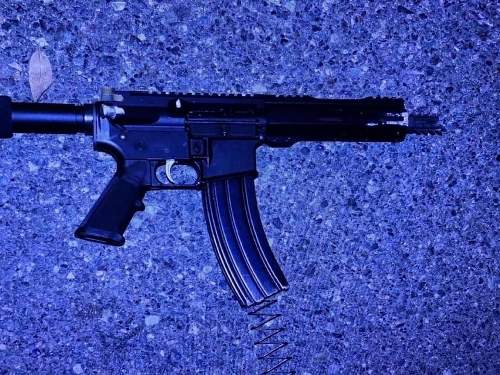 Late Tuesday night, Anaheim Police Dispatch received several calls reporting a male brandishing a rifle at passerby’s in the 200 block alley of E. Wakefield Avenue in Anaheim. The crew of Anaheim airship “Angel” located the suspect and confirmed he was armed with a rifle before he entered a vehicle and drove away from the location. The crew of Angel coordinated with APD ground units who attempted a high-risk car stop on the vehicle. The driver initially appeared to yield, but quickly sped away leading officers on a high speed pursuit.

During the pursuit, the suspect, identified as 25-year-old Anaheim resident Lorenzo Armenta fired his rifle at a pursuing Anaheim PD Sergeant. Luckily, the Sergeant was not struck by gunfire. The suspect continued to flee before throwing his weapon from the vehicle. Ultimately, the suspect drove onto the dead end of 200 S. Elders Street where pursuing police units used their vehicles to block the suspect from exiting. On-duty Anaheim Tactical Negotiators began working on communicating with the suspect to convince him to surrender peacefully. Still unwilling to surrender, the suspect attempted to escape by unsuccessfully driving through residents’ yards. Arriving Anaheim PD SWAT personnel used armored vehicles to immobilize the suspect’s car while negotiators continued to appeal to him. After over an hour of negotiations, the suspect surrendered to officers without incident.

ARV’s – or armored rescue vehicles are a valued and effective tool utilized by our department to contain armed and dangerous suspects. The vehicles are used to provide a safe working space for our officers as they attempt to deescalate and negotiate for compliance. As seen in this incident, the armor can help immobilize and prevent the suspect’s gunfire from striking civilians. They can also transport, evacuate and rescue citizens and officers alike.
These tools, coupled with our Tactical Negotiators continue to give our officers options to reach peaceful resolutions, when feasible. This incident occurred after the shooting deaths of two California law enforcement officers. Detective Luca Benedetti of the San Luis Obispo Police Department and Officer Jimmy Inn of the Stockton Police Department were each killed in the line of duty by gunfire in the previous 24-hour span.