Here are the eateries that got busted: END_OF_DOCUMENT_TOKEN_TO_BE_REPLACED 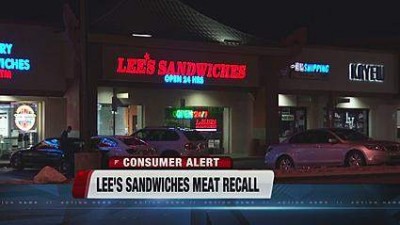 Today there is talk again about starting a letter-grade health rating system for local restaurants and once again Do is opposing this – even though EVERY County in Southern California uses such ratings. END_OF_DOCUMENT_TOKEN_TO_BE_REPLACED

Garden Grove’s Vietnamese coffeehouses now have until the weekend to fully comply with an ordinance that went into effect last Friday, according to the L.A. Times.

The new ordinance demands that “​Windows must be untinted. Gambling machines must be removed. Cigarettes must be tossed. And those little pasties adorning the nipples of waitresses must be replaced with something that resembles real clothing,” according to the O.C. Weekly.

“Officials say there are 37 of these coffee houses in Garden Grove. Raney told council members that the cafes have become notorious for gang activity and waitresses who wear nothing under their sheer dresses. The ordinance requires the waitresses not to expose the area of their breasts below the areola,” according to the O.C. Register.

You have to wonder if Supervisor Janet Nguyen’s husband, Tom Bonikowski, was involved in this crackdown, in his capacity as a Garden Grove Planning Commissioner.  If so, this may cost Nguyen votes in her next election.  The cafes are very popular in Little Saigon.  Click here to sift through the Garden Grove Planning Commission agendas and minutes.

If Bonikowski did lead the charge against the Viet cafes, it would be ironic since he owns a Lee’s Sandwiches franchise in Stanton that has been busted repeatedly for health code violations.

How long before Santa Ana’s Usual Suspects start complaining about our own Vietnamese Cafe, the famous Cafe Lu?  The owner of Cafe Lu, Natalie Nguyen, used to be one of the Cafe Lu girls, but she bought the place a few years ago.  Now they are doing great – and they even sell a Cafe Lu girls calendar.  You can get a glimpse of it at their website.  And you can see even more pictures on their Facebook page, by clicking here. 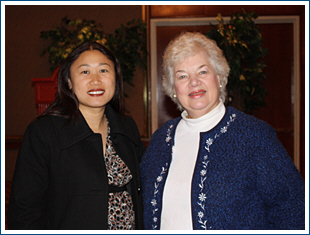 County Board of Supervisor Chair Janet Nguyen gave birth to her first child, a baby boy, Wednesday afternoon.
Thomas Bonikowski III was born 12:46 p.m. and weighed in at just 7 lbs and 13 ounces, said the supervisor’s spokeswoman Kathryn Feath, according to the O.C. Register.

This took me by surprise!  I had no idea that Nguyen was pregnant.  Congratulations to her and to her husband, Bonikowski, who also serves as a Planning Commissioner in the City of Garden Grove.  Bonikowski also co-owns a Lee’s Sandwiches franchise, along with former Nguyen Chief of Staff Andrew Do, in the City of Stanton.  It should be noted that Do is a City Councilman in Garden Grove.  He now runs his own law office. 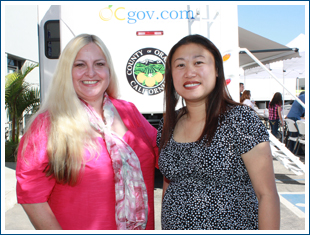 In retrospect, Nguyen did look quite pregnant in the pictures above, which I found in Nguyen’s photo gallery.

Nguyen’s Supervisorial District includes the City of Santa Ana.  She is supposedly working on redistricting before her re-election campaign in 2012.  It remains to be seen if most of Santa Ana will still be in her district after that.

It is a little known fact that Nguyen honeymooned at a Mexican resort, with her former ally, Van Tran, who she endorsed this year in his race against Congresswoman Loretta Sanchez.  Tran is way ahead of her as I believe he has two kids to her one.

Having a child is a life-changing experience.  I believe this will be a benefit to Nguyen as she will now have something in common with families in her district.  Santa Ana is the youngest city in Orange County.