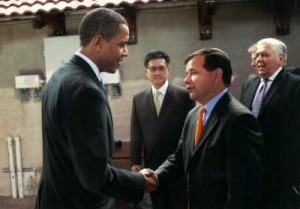 We have heard all this before from the Voice  of OC.  Here is what it boils down to – an auto parts business owner in Santa Ana swapped a home in Westminster for a parking lot owned by Mayor Miguel Pulido’s father.  Pulido later sold the home for a $197,000 profit. END_OF_DOCUMENT_TOKEN_TO_BE_REPLACED