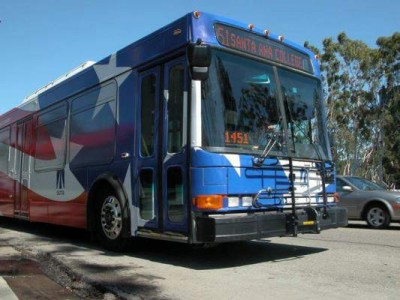 This week, the Orange County Transportation Authority Board reviewed results of the 2014 Fixed Route Bus Services Customer Satisfaction Survey, which showed that nine out of 10 bus riders say they are satisfied with OCTA’s bus service.

“We strive to provide high quality bus service to improve mobility throughout the county, and it’s great to see that customers are pleased with the services being provided,” said OCTA Chairman Jeff Lalloway, also the Mayor Pro Tem of Irvine. “We also learn from the survey and will continue to make enhancements to our bus system to ensure that level of satisfaction remains high.”

OCTA’s bus system is an integral part of OCTA’s goal of supporting the diverse needs of travelers by increasing mobility, reducing emissions and ultimately, enhancing the quality of life for Orange County. OCTA’s fixed-route bus system includes 77 routes operating throughout the county, serving more than 160,000 riders per day on an average weekday.

Every few years, OCTA completes a customer satisfaction survey to measure how it is serving riders. More than 2,500 bus riders from a variety of routes were surveyed. They were allowed to complete the written survey in English, Spanish or Vietnamese. Among the findings:

· Nearly half of riders surveyed indicated that OCTA’s fixed-route bus service had improved over the last 12 months, and about 40 percent indicated it remained the same.

At least three-quarters of riders indicated they were satisfied with information provided in the Bus Book (78 percent) and on the www.octa.net website (77 percent).

The survey also indicated potential areas of improvement. Riders expressed lower levels of satisfaction with information provided at bus stops (72 percent), the cost of riding the bus (68 percent), on-time performance of the bus (67 percent) and frequency of buses/wait times at bus stops (62 percent).

Board members requested additional information about on-time performance of the bus system to gauge what additional improvements could be considered.

When asked to rate the importance of various aspects of the bus service, riders indicated that buses running on-time is the most important (94 percent rated as extremely or very important), followed by safety of the bus (92 percent), safety of bus stops (92 percent) and travel time for their trip (91 percent).