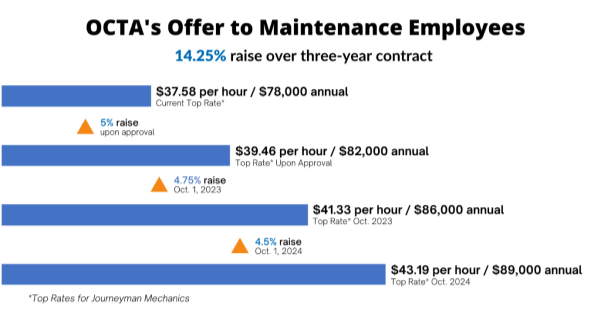 ORANGE – The Orange County Transportation Authority is notifying passengers that bus service will be halted throughout the county beginning Thursday, Nov. 3, after maintenance employees began striking this afternoon.

Passengers are asked to continue checking octa.net for service updates. ACCESS service for those with disabilities will continue as usual.

OCTA remains committed to reaching a resolution and was expecting to resume negotiations on Friday, however the union announced a strike. OCTA is willing to meet with the union at any point.

OCTA’s contract offer – which equals a 14.25% wage increase over the three years, compensates the maintenance employees fairly, is very competitive in Southern California, and is responsible to taxpayers. The offer includes an immediate 5% raise, another 4.75% raise on Oct. 1, 2023, and an additional 4.5% raise starting Oct. 1, 2024.

In addition, OCTA has offered to increase healthcare contributions by 16% over the same period while continuing contributions to the two pension plans that union members receive, including contributing 26.4% of employees’ wages to the Orange County Employees Retirement System (OCERS) and $1.30 per hour worked (up to 2,080 hours) to the Western Conference of Teamsters Pension Fund.

“We are disappointed the union has called off negotiations and ask that they return to the table so we can reach a fair resolution that rewards our maintenance employees for their great work,” said OCTA Chairman Mark A. Murphy, also the Mayor of Orange. “Thousands of people rely on OC Bus to get to school and work every day, and we hope the union calls off the strike to avoid further hurting the people in Orange County who can least afford to be hurt.”

OCTA’s offer, subject to union ratification, would result in a top wage of $43.19 an hour for journeyman mechanics – equivalent to nearly $90,000 per year – not including healthcare and pension contributions.

OCTA’s maintenance employees are the only group who are in the Teamsters Labor Alliance Trust fund for their health insurance, meaning the plan cost and design – including premiums, co-pays and benefits – are completely within the control of Teamsters leadership. On average, OCTA’s coach operators, which are under OCTA’s healthcare plan, pay approximately $120 per month for their healthcare contribution. OCTA has offered to provide healthcare options to lower the monthly cost for maintenance employees.

In its effort to avoid impacting passengers, OCTA sent a letter to Gov. Gavin Newsom asking the state to intervene and temporarily stop the strike. There has been no response to this request. By law, the Governor may intervene in a transit labor dispute and appoint an independent board to review the issues and ask for a cooling-off period where negotiations would resume while maintenance employees continue to work.

Public transit is critical for people to reach jobs, education, healthcare, grocery shopping and elsewhere. Approximately 85% of riders use OC Bus as their primary means of transportation and more than half of riders have a total household income of less than $50,000.

Transit service is also vital to students getting to and from school. In the last year, more than 3 million trips have been taken on OC Bus with OCTA’s Youth Ride Free and College Pass programs.

OCTA has met with the union more than 20 times, including mediated sessions, to negotiate a new contract. The existing contract expired Sept. 30.

Note – Santa Ana Mayor Vicente Sarmiento is on the OCTA Board of Directors. Why didn’t he do more to stop this bus strike?

About OCTA: The Orange County Transportation Authority is the county transportation planning commission, responsible for funding and implementing transit and capital projects for a balanced and sustainable transportation system that reflects the diverse travel needs of the county’s 34 cities and 3.2 million residents. With the mission of keeping Orange County moving, this includes freeways and express lanes, bus and rail transit, rideshare, commuter rail and active transportation. To sign up for more OCTA news, visit octa.net/GetConnected.

One thought on “Shame on the OCTA’s greedy striking maintenance workers for screwing O.C.’s working poor”