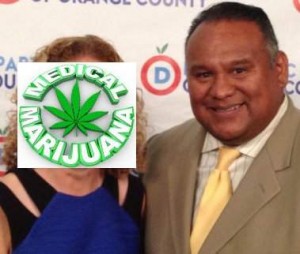 Now Sal as a Councilman is turning away millions of dollars in annual revenue from the contract with ICE at the city jail. This will lead to lay offs at city hall and the jail, and less in salary increases for everyone else. Isn’t Sal pro-union? To top it off, apparently the ICE inmates now will have to go from now and into the future to some horrible private for-profit jail in Adelanto.

We’re sure he’s promised the unions in the past that he is against outsourcing and killing public union jobs, but that’s what he’s doing  here. Councilmembers Martinez and Benavides voted with him, but he’s been the one hogging up the press on this issue. He loves to placate the lefties and activists from groups like Raiz and Resilience OC. Great company for him.

We hear he also still works on the side for marijuana companies in town. So marijuana jobs are ok, but not city jail jobs. Ok Sal. Tell that to the kids to teach.

As his coworkers at SAUSD pray for keeping their jobs, hopefully Sal can pray for them also and maybe even the employees that work under his watch in the city. City employees have families too.