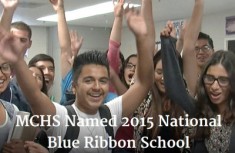 Middle College High School joins 334 other schools across the United States with the prestigious distinction of being selected a National Blue Ribbon school for their overall academic excellence and their progress in closing achievement gaps among student subgroups – clearly a demonstration that all students can achieve to high levels.” I’m extremely proud to be the principal of a school with students that work so hard and teachers that put in such an amazing amount of effort to make sure that each student’s needs are being met,” said Dr. Kathy Apps, Principal of Middle College High School.

All National Blue Ribbon Schools are recognized in one of two performance categories, based on all student scores, subgroup student scores and graduation rates.

Exemplary Achievement Gap Closing Schools are among their state’s highest performing schools in closing achievement gaps between a school’s subgroups and all students over the past five years. Student subgroup performance and high school graduation rates for each subgroup are at high levels.

If you are interested in covering this event, please contact Deidra Powell, Chief Communications Officer for the Santa Ana Unified School District at (916) 534-6559 or deidra.powell@sausd.us. Immediately following the ceremony, students will enjoy a school-wide barbecue with musical entertainment. Interviews will be available with students, teachers, and school administrators.

« Free performance by the Banda Sinfónica de Morelos, Zacatecas set for 12/13 at the Bowers
Santa Ana nonprofit appoints local leaders to its Board of Directors »