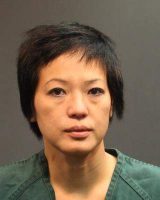 SANTA ANA, Calif. – A woman was sentenced to two years in county jail today for committing a hate crime, grand theft, and vandalism for stealing three gold statues from a Buddhist temple in Santa Ana.