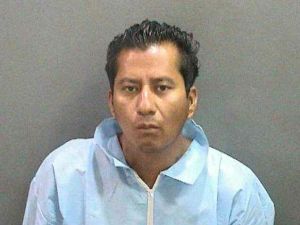 Case # 10CF1350: MAN CONVICTED OF RAPING, ORALLY COPULATING, AND STRANGLING 15-YEAR-OLD FEMALE RELATIVE AFTER BREAKING IN THROUGH BEDROOM WINDOW AS SHE SLEPT

SANTA ANA – A man was sentenced today to 46 years to life in state prison for sexually assaulting and strangling a 15-year-old female relative, including raping and orally copulating her, by breaking in though her bedroom window while she slept. Gonzalo Salazar, 37, Santa Ana, was found guilty by a jury May 24, 2011, of one felony count each of forcible rape, forcible oral copulation, aggravated assaulted, assault with the intent to commit a sexual offense, and assault with the intent to commit a sexual offense during the commission of first degree burglary. The jury found true the sentencing enhancements for forcible rape in the commission of burglary and causing great bodily injury in the commission of a sexual assault.

In August 2008, Salazar was living in a Santa Ana home with several extended family members. On the night of Aug. 15, 2008, a 15-year-old female relative, Jane Doe, went to sleep in her room while other family members watched television in the living room. Salazar went to his bedroom, climbed out of his bedroom window to avoid detection by the other people in the home, and broke into Jane Doe’s bedroom through her window.

Salazar climbed on top of the victim and removed her clothes. When Jane Doe tried to scream for help, the defendant strangled her so severely that she faded in and out of consciousness. He then raped and orally copulated her while she was unable to resist. The victim sustained visible injuries to her face, eyes, and neck including bruising and broken blood vessels. These injuries are consistent with being near death due to loss of oxygen and incapacitation. The victim also sustained injuries consistent with being raped.

The defendant then fled back out through the victim’s bedroom window. Jane Doe ran from her room naked and crying called 911. The Santa Ana Police Department (SAPD), who investigated this case, responded to the scene. After fleeing on foot from the home, Salazar called a male transvestite, whom he had met one week earlier, to pick him up.

The defendant engaged in sex acts with the man before returning home. The male transvestite testified during the jury trial that Salazar became angry when the man dropped him off near home in Santa Ana and unsuccessfully asked instead to be taken to Fountain Valley.

Salazar was arrested by SAPD officers while he was walking back to his house. DNA consistent with the defendant’s profile was later matched to DNA found on the victim.

During the sentencing today, the Honorable Steven Bromberg told the defendant, “You are a despicable human being.”

Salazar briefly spoke at the sentencing and maintained that he did not commit the sexual assaults described by the People and claimed that the sentence was unfair.