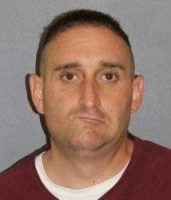 Irvine, CA – The Irvine Police Department (IPD) has arrested a man following a vehicle pursuit. The suspect is identified as Carl Gonzalez, 33, of Santa Ana. He was arrested on charges including evading a police officer, obstructing/resisting a peace officer, hit and run causing property damage, possession of a controlled substance, and possession of controlled substance paraphernalia. At the time of his arrest, the suspect was on parole.

At approximately 3:30 a.m. today, June 8, 2016, an Irvine Police officer attempted a vehicle stop in the area of Harvard Avenue and Warner Avenue. The driver of the vehicle failed to yield and the officer initiated a short pursuit.

While attempting to flee from police, the suspect vehicle collided into the curb at Warner Avenue and West Yale Loop and became disabled. Gonzalez then got out of his car and fled on foot. IPD officers set up a perimeter and began a search of the area.

A short time later, IPD received a call from a citizen in the neighborhood reporting that Gonzalez had requested to use his cell phone. The citizen also provided the suspect’s location. IPD responded and located Gonzalez, who was arrested without incident.

Narcotics and paraphernalia were found in the suspect’s vehicle.

IPD would like to thank the citizen who assisted in the timely arrest of this suspect.
###

Since its incorporation in 1971, Irvine has become a nationally recognized city, with a population of 250,384, spans 66 square miles and is recognized as one of America’s safest and most successful master-planned urban communities. Top-rated educational institutions, an enterprising business atmosphere, sound environmental stewardship, and respect for diversity all contribute to Irvine’s enviable quality of life. This family-friendly city features more than 16,000 acres of parks, sports fields and dedicated open space and is the home of the Orange County Great Park – the first great metropolitan park of the 21st century. For more information, please visit cityofirvine.org.