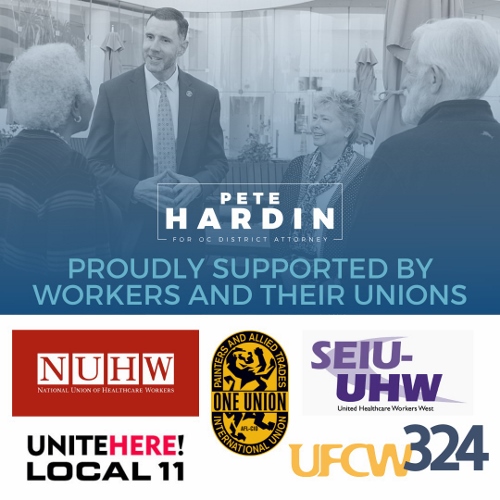 ORANGE – Todd Spitzer’s campaign has sued the Orange County Registrar of Voters to keep certain information out of the official guide that the county sends voters in the mail. Today, at 1:30 p.m., attorneys for Todd Spitzer will argue before the Honorable Nathan Scott in Department W2 of the Superior Court that the voters should not receive information detailing the office’s scandals ranging from sexual harassment to racism, corruption and criminal misconduct.

“These are important facts that the voters need to make an informed decision about who should be the next District Attorney,” said former Marine Judge Advocate Pete Hardin. “Without understanding the scandals unfolding within the District Attorney’s office, how are voters supposed to know what qualifications are important in selecting a replacement? From rampant sexual harassment to racism and pay-to-play corruption, voters are entitled to hear why we need new leadership. Democracy dies in darkness, and Todd Spitzer wants to blindfold the voters.”

In documents filed with the court, Spitzer’s attorneys avoid challenging the truth of data detailing soaring crime and homelessness, instead choosing to plead with the court to remove a section of Pete Hardin’s candidate statement detailing the various scandals facing the office. That passage reads:

“The District Attorney’s office is plagued with scandals, from rampant sexual harassment and racism that has undermined the prosecution of dangerous offenders, to pay-for-play political corruption and criminal misconduct. Furthermore, a man that sexually harassed multiple women was promoted after allegations of his misconduct were reported.”

Spitzer’s lawsuit relies on winding arguments and a number of factually misleading claims in a court filing, with his attorneys making the audacious claim that the statements above are untrue. For example, Spitzer’s attorneys go so far as to claim Spitzer “did not do anything wrong” in the ever-growing sexual harassment scandal. Spitzer’s attorney’s also rely on an Elections Code Section which specifies that candidates may not reference other candidates. However, no other candidates were referenced in Hardin’s ballot statement.

“Whether he’s lying to the court to cover up his racist remarks, violating the county’s abusive conduct policy, arresting someone at Wahoo’s Fish tacos, or attempting to keep public information from the voters, Todd Spitzer doesn’t think the rules apply to him,” said former Marine Judge Advocate Pete Hardin.