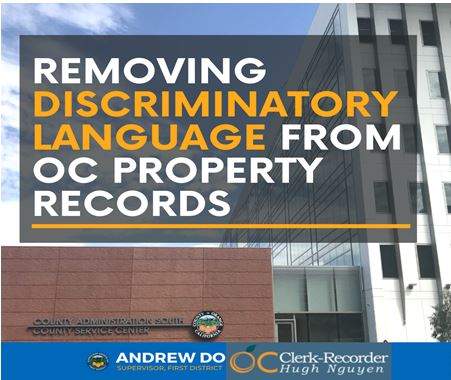 Unbeknownst to property owners and renters, some property records in California still contain discriminatory language that promotes racial segregation in our communities.

Orange County Board of Supervisors Vice Chairman Andrew Do and Clerk-Recorder Hugh Nguyen have teamed up to propose a proactive approach to combating discriminatory language in recorded property documents.

“Most Orange County homeowners would be shocked to know that their property records contain illegal and discriminatory language,” said Supervisor Andrew Do, Vice Chairman of the Orange County Board of Supervisors.

“The proposal, which will be brought forth to the Board of Supervisors on September 29th, creates a program to remove discrimination from property records in Orange County,” Supervisor Do explained. “This is an important step towards removing walls and barriers to immigrant and minority communities in Orange County.”

Orange County Clerk-Recorder Hugh Nguyen has promised to work in expediting the removal of discriminatory language from homeowners’ property records free of charge upon request.

“We want to send a clear message to homeowners in Orange County, that no matter what happened in the past, we are here to assist moving forward,” said Clerk-Recorder Nguyen.

The practice of adding racial restrictive covenants in property deeds began in the 1920s. These were agreements binding property owners not to sell or rent to specific groups because of race, creed, or color.

“For decades, Orange County has been a place in transition, enabling people from all walks of life to work together for a better future,” said Supervisor Do. “As someone who came to America as a refugee during the Vietnam War, and is now serving as a County Supervisor, I know full well the power of the American Dream, and that we must keep it alive in Orange County.”

Past attempts by state lawmakers to remove racist covenants have failed to gain support in Sacramento. In 2009, Gov. Arnold Schwarzenegger vetoed AB 2204, which would have required racially restrictive covenants to be stricken from the public record during real estate transactions.

Last month, California Assemblymember Kevin McCarty announced his intent to bring forward legislation to remove racist language from real estate deeds. Supervisor Do’s proposal will also require the County’s CEO to provide an analysis of the bill when it is introduced, and any amendments necessary to justify a support position from the Board of Supervisors.