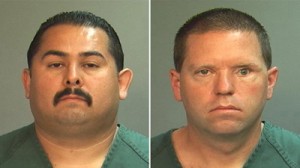 WHAT: Appeared in court today for arraignment for their criminal participation in the beating-death of a homeless man, Kelly Thomas.

Ramos’ arraignment was continued to Sept. 26, 2011, and he is in custody on $1 million bail. Under Marsy’s Law, the victim’s father had the opportunity to address the court asked that bail not be reduced based on the “horrific way my son was murdered.”

Cicinelli pleaded not guilty at the arraignment today and is out of custody on $25,000 bail. He is scheduled for a pre-trial hearing Nov. 4, 2011.

Ramos and Cicinelli will both appear in Department C-55, Central Justice Center, Santa Ana, for their hearings. Both have been ordered by the court not to be in possession of firearms.

« You can now fly direct from Orange County to Mammoth
Correa to host a Health and Fitness Fair on Saturday, at Valley High School »