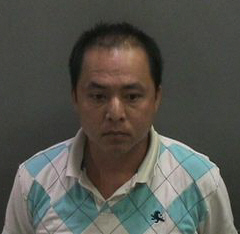 WESTMINSTER – A man was arraigned today on charges of animal abuse for cruelty to dogs and rabbits, resulting in the death of six newborn rabbits. Khuong Anh Nguyen, 35, Garden Grove, is charged with eight felony counts of animal abuse. If convicted on all counts, he faces a maximum sentence of seven years and eight months in Orange County Jail. The defendant is being held on $50,000 bail. Nguyen is scheduled for a pretrial hearing, May 14, 2012, at 9:00 a.m. in Department W-14, West Justice Center, Westminster.

Nguyen is accused of owning and keeping five bulldogs, a rabbit and her six newborn, in the backyard of his home. He is accused of housing the animals in an inhospitable environment.

On Dec. 14, 2011, Garden Grove Police Department (GGPD) was dispatched to Nguyen’s residence, as a result of an animal cruelty call. When officers arrived and entered the backyard, they found one female bulldog in a cage and four male bulldogs. Nguyen is accused of being the owner and not taking care of the dogs. He is accused of keeping them in a dirty environment with feces everywhere. Nguyen is accused of keeping the female bulldog in the cage with clothes rubber-banded around her front legs. She was found by GGPD cowering from the pain of the rubber bands cutting into her skin, which cut off circulation and produced a putrid smell of rotting flesh. He is accused of owning a rabbit, which had recently birthed six newborns. GGPD found the rabbit sitting on top of the cage while inside lay the six deceased baby rabbits, drowned in rain water and urine.

OC Animal Care and GGPD took all the live animals from the home, and the female bulldog was nursed back to health by OC Animal Care veterinarians.

Nguyen was arrested Friday night, May 4, 2012, by Garden Grove Police.

2 thoughts on “Nguyen, of Garden Grove, charged with killing baby bunnies and other abuse”